MiamiNewTimes: About three-quarters of the way through the show, Rihanna took a moment in between songs to thank her band and crew. Pointing toward the ceiling, she gave a shoutout to the folks working the lights. “They haven’t taken a shit for two hours,” she explained with a smirk.

The same could be said about many of today’s biggest pop stars — figuratively speaking. But not Rihanna.

The 28-year-old Barbadian is one of the most honest stars working in the music industry today. She poops, emotionally, in front of all of us without shame. You can smell it all over her latest album, Anti, which showcases a vocal range and musical diversity unlike anything Ri-Ri has done before.

Rihanna came to Miami’s American Airlines Arena last night. The first eight shows on the tour had to be rescheduled due to production delays, but everything is luckily up and running by now.

Rihanna delivered at least a verse of most of her famous hits — just about every chart-topper from her discography save “Pon de Replay.” After “Umbrella,” she told the sold-out crowd she was still surprised people love that song so much. She compared her old hits to old shoes: “You don’t want to wear that shit anymore.”

After, she transitioned into some of her newer material from Anti. The dancehall-inspired beat for “Work” came on, and the crowd went bonkers. Rihanna shook and gyrated when all of the sudden a figure creeped in from stage right. The wave of realization swept across the stadium like a wind as the crowd suddenly figured out it was looking at Drake. 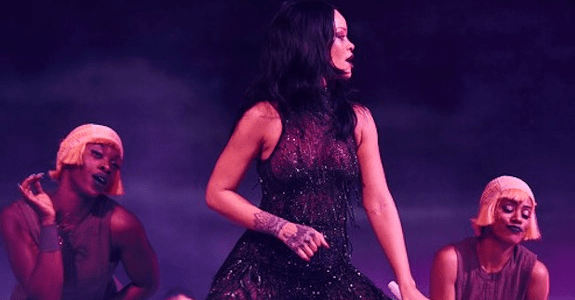 The two superstars — arguably two of the biggest working today — joined each other onstage. Singing “Work,” they did their adorable little dance that’s become somewhat of a signature move for them: Drake — with a goofy grin, grimacing like he just tried a lemon for the first time — stood stiff while Rihanna bent over and tenderly rubbed her butt against his groin like it had a headache.

After “Work” Rihanna left the stage for a moment and Drake launched into his verse from “Jumpman.” He finished, thanked Miami, said that Views From the 6 is”coming soon,” and departed for the night.

A giant wall made out of foam dripped down in big clumps behind Rihanna as she retook the stage. She fed the crowd a few more hits, including “Diamonds,” before closing out with two of what she said were her favorite songs from Anti: the doo-wop-inspired “Love on the Brain” and what’s poised to be the next single offAnti, “Kiss It Better.”

The two tracks — which are two of the most different songs on the album, musically speaking — share one big similarity. Both tracks deal with the type of love Rihanna has become famous for singing about. It’s a sticky, complicated, and at times brutal kind of love. But it’s a very real kind of love and one modern pop rarely, if ever, tackles. It’s a love that can seem stupid to an outsider and usually makes sense only to the two people actually entangled within it.

In “Love on the Brain,” Rihanna boils it down in a pre-chorus mantra like this: “It beats me black and blue, but it fucks me so good/And I can’t get enough.”

Rihanna has given up the façade of perfection long ago. In some ways, she was forced to — by the media, by forces beyond her control. But Rihanna has shown us that there are real people underneath the polished sheen of pop stars, men and women flawed like us, who might not always make the popular decision but who wake up each morning and try again regardless. Could you ask for a better role model than that? Sure. But you won’t get one. Not a real one, at least.